How can I become a Board Member?

The Police Services Act establishes the number of Board members in direct relation to the population of the area it represents.

The Board elects a Chair and Vice-Chair at its first meeting of each year. The timing and election of the Chair is legislated by the Police Services Act.

The Toronto Police Services Board is the only Board in Ontario to be headed by a full time Chair. This position carries a salary of $90,963. Despite the increasing complexity of the position, the salary has not changed since 1987.

City of Toronto Councillors are not compensated for their work on the Board; rather, this service is seen as part of their regular duties.

Board Members are governed by a code of conduct.

How to apply to be on the Police Services Board

There are a number of ways you can become a Board member.
You can get appointed to the Board by

How can I complain about the actions of a Board member?

Board members are governed by a Code of Conduct which establishes a minimum standard of conduct for Board members. For example:

7. Board members shall discharge their duties loyally, faithfully, impartially and according to the Act, any other Act and any regulation, rule or by-law, as provided in their oath or affirmation of office.

8. Board members shall uphold the letter and spirit of the Code of Conduct set out in this regulation and shall discharge their duties in a manner that will inspire public confidence in the abilities and integrity of the board.

9. Board members shall discharge their duties in a manner that respects the dignity of individuals and in accordance with the Human Rights Code and the Charter of Rights and Freedoms (Canada).

13. Board members shall refrain from engaging in conduct that would discredit or compromise the integrity of the board or the police force.

The Toronto Police Services Board has developed a policy on complaints that requires all complaints about Board members to be reviewed by the Board in a prescribed manner.

Complaints should be in writing, signed by the complainant and be sent to the Chair, Jim Hart, Toronto Police Services Board, 40 College Street, Toronto, M5G 2J3.

What exactly does the Board do?

The Board has specific legislated responsibilities:

Who is the Board accountable to?

The Board is accountable to both the community and to the Ontario Civilian Police Commission (OCPC).

Complaints against Board members should be directed to the Chair of OCPC. 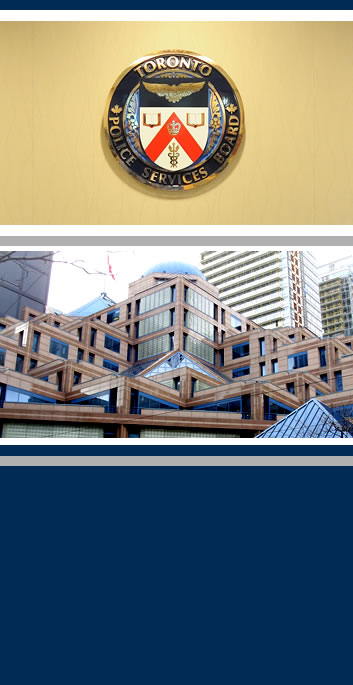